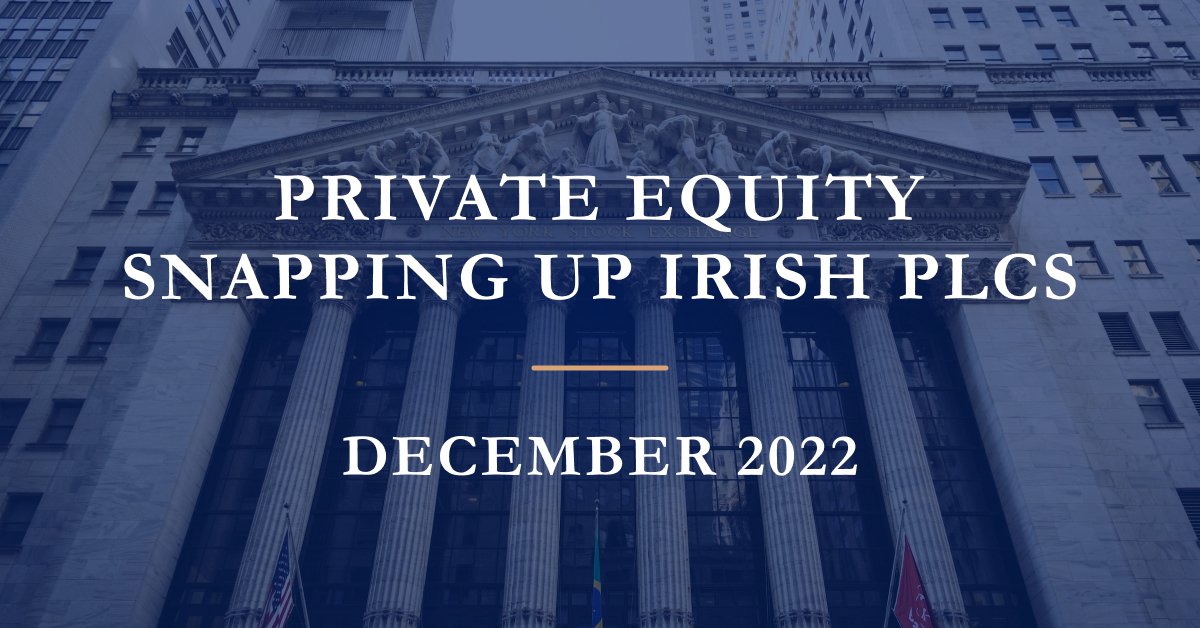 In 2018 Euronext completed the purchase of the Irish Stock Exchange, ISE, from the country’s main stockbrokers. IPO activity on Euronext Dublin has been relatively quiet in recent years with a select number of companies such as Health Beacon (2021), Corre Energy (2021) and Uniphar (2019) taking up new listings. While there are many advantages to going public such as access to new financing, liquidity and enhanced visibility, they come at a cost:

Historically ambitious Irish companies such as Ryanair, Kerry Group, DCC et al have had limited options when raising capital. Markets have evolved in recent years and many more options are now available, in particular private equity which allows ambitious founders and management teams to grow outside of the spotlight of a PLC existence.

Selected listed companies are trading below the fair value they would achieve in an M&A transaction. This has created the perfect opportunity for private equity firms to deploy unspent capital through the takeover of a public company. The takeover of a public limited company (PLC) involves delisting its shares and implementing a business plan in order to improve profitability. Over the last 20 years, private equity firms have offered the highest premiums for listed companies, paying almost 70% above the prior share price in some cases. According to Refinitiv’s records, in 2021 buyout groups paid an average premium of 45% for European companies.  Some recent examples of Irish taken private deals include:

A Dublin-based property owner and developer was taken over by Canadian-based Brookfield Asset Management in June this year. The company was listed on Euronext Dublin and the London Stock Exchange since 2013, however, shares in the Irish group had traded at a discount to net tangible assets for six years, making it an attractive takeover target. This is the third Irish REIT to be taken private in recent years following the privatisation of Green REIT and Yew Grove under similar circumstances, leaving Ires REIT as the final Irish REIT to remain as a publicly listed company.

Brookfield Asset Management offered investors €1.60 per share plus a 3.4c dividend, this valued the company at c. €1.1bn, an almost 36% premium to the share price at the time.

The pharmaceutical distribution company was taken over by US private equity company Clayton, Dubilier & Rice in August of 2021. UDG was first listed in 1989 as a cooperative by a group of pharmacists to secure a reliable supply of medicines. The company expanded internationally and completed 30 acquisitions between 2000 and 2016 when Liam FitzGerald led the business as Chief Executive. During his time the company was also delisted from Euronext Dublin and it was exclusively traded on the London Stock Exchange from 2012-2021.

UDG primarily focused on two businesses at the time of the takeover: Ashfield, an outsourced service provider for sales reps and healthcare communications for drug makers, and Sharp Packaging. Following the acquisition Ashfield was integrated with another Clayton, Dubilier & Rice company, Huntsworth and Inzino was formed. Sharp Packaging continues to be run independently. Accounts filed by UDG Healthcare at the end of August show profit increases of over 340%, mostly due to an uplift in the company’s financial investments in subsidiary undertakings related to Clayton, Dubilier & Rice’s takeover of the business.

A petrol forecourt retailer with operations in Ireland, the UK and the US was delisted in March 2021 in a take-private transaction financed by Blackstone. Blackstone offered €5.75 per share, representing a 48.2% premium over its share price on 9 December 2020, a day before it announced being in talks with the consortium about a takeover. It was also a 13.9% premium on the previous day’s close and valued the business at c. €718.1m. Applegreen was first listed in June 2015 when stock was issued at €3.80 per share. Shares in the company reached a high of €6.62 in September 2018 and fell to a low of €2.05 in March of 2020. The undervalued share price and Applegreen’s plans to transition to offering electric vehicle charging infrastructure led to Blackstone making the offer in the belief it will add further value to the business.

Unlike the aforementioned take-private deals, CPL Resources, a Dublin-based recruitment company was not acquired by a private equity company but was taken private by Outsourcing Inc., a Japanese multinational human-resource solutions business. Anne Hegarty co-founded CPL in 1989 and listed it on the stock market in 1999, making her the first female CEO of an Irish publicly listed company. After listing the company, CPL expanded rapidly and completed 16 acquisitions across Ireland, the UK and Europe between 2000 and 2019. The sale of the business was part of a strategy to further expand CPL, as Outsourcing Inc had a wider better resourced recruitment group with 134 global locations at the time.

Outsourcing Inc. offered €11.25 per share in an all-cash deal in November 2020. This was subsequently approved by CPL’s board and the deal was executed on 21 January 2021, valuing the business at c. €318m. Anne Hegarty and her husband Paul Carroll held a 34.9% stake in the business and received a significant payout of c. €110m. This offer represented a 50.6% premium on CPL’s share price over the previous 30 days and a 36.4% premium on the stock price the day prior to the announcement.

Following the sale, Anne Hegarty was announced as Irish Times Business Person of the Year 2021. The award was presented to Hegarty to acknowledge the excellence and outstanding achievement during her time as Chief Executive of CPL, as well as her other roles, which included being former President at Ibec and non-executive board member at Kingspan.

Other deals have included the Gallagher family’s acquisition of Abbey Homes, Green REIT and Mainstay Medical.

The stock market will likely remain turbulent for the foreseeable future, due to ongoing issues such as fears of a recession and the global energy crisis. Companies such as Dalata, Origin Enterprises and Grafton Group PLC have experienced significant share price declines due to the current economic environment, however, the quality, strength and long-term performance of each business line them up to be suitable targets for future take-private deals.

Disclaimer: This article was written by Conor Michigan of Renatus, in partnership with the Business Plus Magazine.