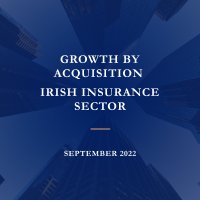 Almost 50 insurance brokerage deals have taken place in Ireland in the past five years. The Irish insurance broker market has undergone a wave of consolidation as players have been using acquisitions, often aided by Irish and international private equity firms, to grow their businesses and drive market share.

Growth by acquisition can look relatively inexpensive when there is access to cheap capital. This is in comparison to organic growth which can be expensive in a densely populated sector such as the insurance broker market. There are several factors to take into consideration that have been growing transactional behaviour, these include;

WHAT ARE BUYERS LOOKING FOR?


The most active buyers in the Irish market are a mix of private equity backed local backers and foreign players. As part of purchaser caution, there are particular variables that potential acquirers of insurance brokers will seek, these include;

When looking at the Irish market, Arachas has been one of the most active acquirers. Initially established in 2003 when Hodgins Percival and Slattery Jermyn, two Dublin-based brokers, merged with Cork-based broker Tyrrell Coakley. Arachas has since acquired Capital Cover Group, Kidd Insurances, CoverCentre Insurance and Murray and Spelman following the MBO (Management Buy Out).

In 2020, Arachas was sold to Ardonagh Group, a UK peer supported by HPS Investment Partners and Madison Dearborn Partners. The deal consideration was an estimated €250 million with a multiple of 14.5 times EBITDA. Arachas have also since acquired;

Another private equity backed firm positioned in Ireland is Innovu Group, which is supported by MML. Innovu has been highly active in recent years, having  acquired;

These calculated a gross written premium of roughly €67m in the year 2021 alone.

According to the successful company’s CEO Ronan Foley, the company’s long-term goal is to increase premiums to between €250 million and €300 million. Acquisitions are expected to continue to be a significant strategy for achieving this goal.

A recent entry into the Irish market is Aston Lark, a UK-based firm that in 2019 acquired Robertson Low. Aston Lark has since changed backers from Bowmark Capital to Goldman Sachs which acquired Aston in 2019.

Goldman Sachs then continued its activity in the Irish market by acquiring;

In October of 2021, Goldman Sachs then sold its ownership in Aston Lark to global brokerage firm Howden for an estimated €1.3 billion.

NFP, originally from the US, also entered the Irish market in 2020 when it acquired;

The future level of transaction activity is unclear in the future. Some predict activity to stall whilst capital prices and purchase prices continue to rise. Chief executive of Araches, Conor Brennan expresses that whilst brokers used to sell at an EBITDA of 5x-6x a couple of years ago, they are now being sold at around 8x-10x, a huge increase.

For the moment, the market remains fragmented, in Renatus our guess is that numerous insurance broker-owners who are close to retiring will still be looking for succession and liquidity options in the coming years.

This article was a contribution piece from Renatus’ Kyle Barry for the Business Plus magazine, which can be viewed here.