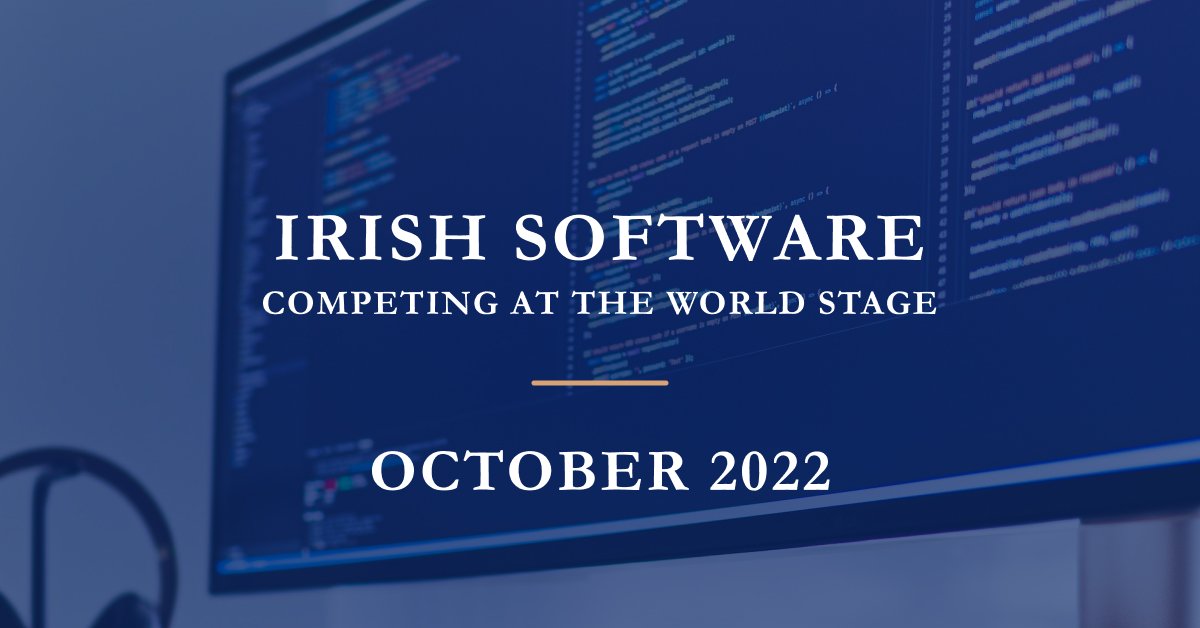 Many local Irish software businesses are withstanding market turbulence and look set to thrive in the years ahead, writes Conor Mehigan of Renatus. In 2011, influential investor and founder of Netscape, Marc Andreessen wrote that “software is eating the world”. His prediction was that software companies would disrupt traditional industries. Since 2011 we have had the emergence of companies like Netflix, Zoom and Airbnb that have transformed the way we live.

Software companies can scale at an incredible pace, unlike traditional businesses that need physical infrastructure or rely on the capacity of a team to sell more product. A great example of this is Zoom during the pandemic. Zoom reported sales soaring over 300% to $2.6bn as companies transitioned to remote working.

Ireland has had great success in the software industry in recent years, boasting several companies that have reached unicorn status, including Fenergo, eShopWorld, Intercom, Stripe, TransferMate, Workhuman, LetsGetChecked, Flipdish and Wayflyer. In addition to these unicorns, it is rare a week goes by where we don’t report a multi-million euro exit of an Irish Software company in the Renatus weekly newsletter. Recent examples include:

Many of the leading tech companies such as Google, Facebook and Airbnb choose Ireland as the location for their EMEA headquarters. According to Tech Life Ireland, c. 80k people are working in tech nationwide. Working at these multinationals are providing people with the skills and expertise in the sector and a good base to set up a company.

One great example is Pointy. Pointy builds tech tools for brick-and-mortar retailers and was sold to Google in 2020 for a reported $160m. Mark Cummins, Pointy co-founder, previously founded Plink, a visual search engine, which was sold to Google in 2010 and allowed Cummins to join the Google team. After c. 3 years Cummins left Google to focus on Pointy and the rest is history.

Location for software companies is less of a barrier for expansion as it can generally be deployed remotely which allows Irish companies to expand to regions with little capital investment.

In Renatus we are a private equity investor in a point-of-sale software company, Kappture, which specialises in POS systems for high-capacity live event venues and hospitality settings. Kappture boasts a client list of marquee venues across the UK&I which includes Croke Park, Celtic Park, Cheltenham, and Ascot to name just a few. In recent months Kappture has deployed its systems in Sweden and opened an office in France, with ambitions to expand beyond that.

According to Knowledge Transfer Ireland (KTI), 32 companies were spun out from Irish research institutes in 2021, in comparison to 30 in 2020. This is slightly higher than the average over the last five years and adds to the 139 that have been established since 2017. An overall spend of c. €672m was recorded on research among Irish universities last year, which is a 6% increase on 2020 and the highest spend since 2014. This is a key contributor to the success of university spinouts such as SoapBox Labs and Manna Drone Delivery.

Manna, founded by Bobby Healy in 2018, is a drone delivery business and Nova UCD spin-out. It has developed a business-to-customer drone service using aviation-grade drones that can fly up to 80km/h. It can deliver goods such as groceries, takeaways, and medicines, within a 3km radius, in under 3 minutes.  Manna has participated in multiple rounds of funding since being established, seven of which have featured in the Renatus newsletter, and has raised c. €30m to date. Following the success of trials in Oranmore Co. Galway and Balbriggan Co. Dublin, the business has partnered with Just Eat, Tesco, Coca-Cola and Samsung to name a few. Plans have recently been announced to expand into the US later this year, the wider European market in 2023 and hire an additional 50 employees to support the existing 103.

University spin-out companies are an influential pathway for commercialising research, while also being a good measure of innovation capacity. As well as having exposure to funding, a university spin-out can attribute their success to having access to top-class facilities and talent. The collaborative environment and mutual synergies allow businesses to scale much more quickly and reap the benefits of the underlying research being done by the university.

Government agencies such as Enterprise Ireland, IDA and ISIF have created a supportive environment for Irish software companies to thrive. A recent article on the Independent1 highlighted that live cattle and sewing machines were Ireland’s main exports to Germany. When Enterprise Ireland’s predecessor, Córas Tráchtála, first opened an office in Dusseldorf in 1962, with total exports then amounting to £5m in Irish punts. On the 60th anniversary, indigenous Irish companies exported c. €1.4bn to Germany with software companies such as Flipdish and in-car connectivity leaders Cubic Telecom capitalising on the market opportunity in Germany.

In business and sport, Ireland has generally punched above its weight on the global stage and software is no exception due to the ingenuity and determination of Irish entrepreneurs.

In 2003 Jimmy Martin was head of automation for Analog Devices and Austin Ryan was a software engineer for Ericsson. The pair met playing hurling and soon discovered they had more in common than GAA. They focused on developing RFID and tracking software which enables access to data on the mover with on-vehicle technology which was the starting point for AMCS. Given the niche nature of the product, the company had to internationalise initially through organic entry and a target acquisition strategy. Today AMCS serves over 2,800 customers in 22 countries with over 600 employees.

Whilst public markets have been turbulent in recent months and valuations of pandemic-era darling stocks such as Peloton and Zoom have been particularly impacted. Many of these Irish software companies are transforming industries and serving solid underlying markets with good growth prospects which will thrive in years to come.

Disclaimer: This article was written by Conor Michigan of Renatus, in partnership with the Business Plus Magazine.